3 Things We Can All Learn from Stuart Scott 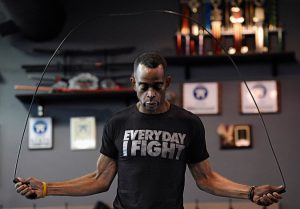 One of the more moving speeches I have seen in quite some time was Stuart Scott’s speech at the 2014 ESPYs when he was presented with the Jimmy V Perseverance Award.

There are a million reasons as to why this speech was so spectacular, but what touched me the most was that he was speaking solely from the heart. He meant every word that came out of his mouth and actually lived it every single day of his life.

Stuart Scott wasn’t just a legendary sportscaster. He was a legend of a human being that brightened everyone’s world around him.

Of course everyone is sad and grieving when someone passes away, but to see the reaction of some of the world’s biggest stars when Scott officially passed away was a clear testament to the way he lived his life. Stuart Scott was the real star.

Here are 3 things we can all learn from Stuart Scott.

One of the most incredible things that Stuart Scott lived and breathed for every single day was to demonstrate to never give up. Whether it’s fighting for what you want in life or continuing to come back time and time again after getting knocked down to your knees, never give up. Stuart Scott was a champion where it mattered most, in the game of life.

It deeply touched my heart the love and affection Stuart Scott had for his family, especially his daughters. You could tell by the way he went about his everyday life how much his family meant to him. We don’t know how much time we have left here on earth. Life in itself is one of the most extraordinary gifts we will ever receive. Love those closest to you now. Stop what you are doing right this second and tell someone that you love how much they mean to you.

If there is one quality that I absolutely love about Stuart Scott it would be his ability to be himself and not worry about what others thought or said about him. When he first got into being a sportscaster and on TV, he brought his own persona. He wasn’t like everyone else. He brought a whole new dimension to being a sportscaster. People praised him, people bashed him, and people doubted him, but one thing that never changed was Stuart Scott being himself.

I strongly believe that Stuart Scott was as successful as he was and was loved by so many from all over the world because of his authenticity while on camera. We can all learn to be more authentic and true to ourselves every waking moment of every day.

I was deeply saddened by the passing of this courageous man who made such a tremendous difference in the world. I never personally met Stuart Scott, but I sure did learn a lot from him and his courageous battle.

“When you die, that does not mean that you lost to cancer. You beat cancer by how you live, why you live, and the manner in which you live. So live. Live. Fight like hell. And when you get too tired to fight, lay down and rest and let somebody else fight for you.” -Stuart Scott